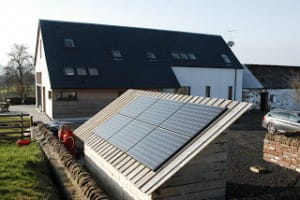 It's now over two years since we dismantled our solar PV system from our previous house and nearly a year since we put the panels on the new woodshed at East Cambusmoon. So high time we made the connection to the grid again!With Jim the electrician round to do some bits and bobs around the house, we took the opportunity to dust off the inverter, check all the cables and connect it up.After a few hours work by Steve and Jim came the time of the big switch on late afternoon. Firstly the solar voltage was checked - 180V in cloudy conditions - then the final connection made. After a final check all disconnects were connected and all switches switched on, and the inverter buzzed into action. A couple of minutes later 300W of power registered on the output meter, then as the sun appeared from behind a cloud as if to clebrate our latest milestone we were up to 900W - 8 times more than we were using with our excess, renewable, organic green electrons spilling back onto the local grid!By the end of the day (we were still generating a few watts at 8:30pm) we had generated over 2kWh, half of which was exported. Next step is to register with Scottish Hydro and get paid 28p for each of those units we export!Home made power doesn't get much better than this...!