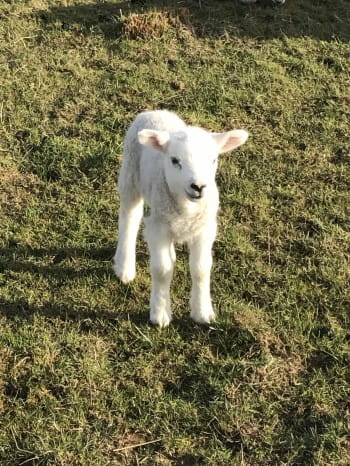 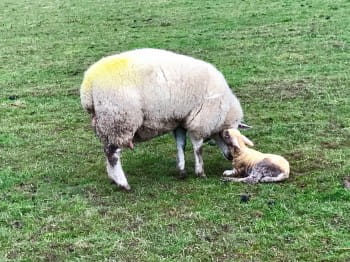 It's been a busy week so far with four new arrivals on the lambing front to date, and both mums and the two sets of twins are doing well!

The first pair were born around 6am on Tuesday (4th April) morning, whilst the 1st of the second pair entered the world around 7pm the same day. Ewe and lamb were led to a pen in the shed, with lamb feeding and food and water left for her mum.

On checking things were ok later that night at around 11pm, another wee bundle of fluff had appeared in the pen, standing up and happily feeding!

But nature and statistics dictate that lambing time has its downs as well as its ups, as last Friday our first two lambs of the season unfortunately didn't make it, one being still born, and the other quite small and weak which only survived for an hour, despite being under intensive care in our kitchen.

The main risks for new-born lambs are cold and starvation, such that it is important to see the lambs stand up (and they do so typically within minutes of birth if healthy), and take their first feed of milk from mum. The key ingredient of this is colostrum, which is naturally produced with the first milk and is the high-octane fuel which a lamb needs to get through its vital first 24 hours and start to build up its strength and immunity.

We have three more ewes yet to lamb, so we'll continue to keep a close eye on them over the coming days, as will our guests in Curlew Cottage who have a grandstand view of events in the 'lambing field'!

Thanks Deborah, the lambs are gorgeous, we managed to catch a glimpse of them in the field this morning before we left. Good to see & hear they are all thriving well. Thanks again for your excellent hospitality xx 👍

Thank you for coming to stay at Curlew, I shall be in touch regarding next year so we can reserve your dates early! The four older lambs (6 days old now) are enjoying the sunshine in the field for a few hours and the two which were born yesterday are inside but thriving and getting plenty of milk.
Safe and smooth journey home, very best wishes, Deborah

We sure have had a grandstand view here at Curlew! It's been an amazing week seeing the lambs arrive on an almost daily basis, despite the sad start last Friday. It's been an unforgettable 10 days but we have loved every minute of it. We hope all the new borns continue to flourish and do well in the days and weeks to follow and we will enjoy watching their progress on the blog.