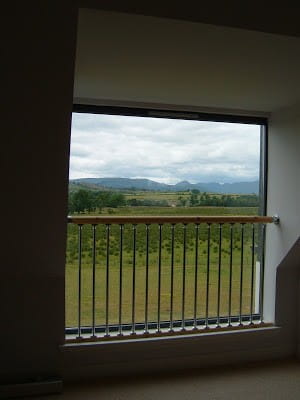 Last Wednesday the joiner returned to fit this to the large upper floor window and on Thursday building control visited and all completion certificate and paperwork were handed over. Another key landmark in the creation of the house. The window illustrated is a fixed light 1.8m x 1.8m and affords a stunning view. We were so disappointed to be advised that this would need an internal barrier in place to comply with building regs. If we had known then perhaps a different design or different specification might have been created in the first place. Looks like a play pen.

BT have failed to meet four appointments to connect the phone. OK they pay compensation of £10 each time but we'd really rather have a phone line. So hopefully order number 5 will work...........

The wonders of nature never cease to soothe, we have an abundance of brown hares who are particularly visible in the early morning 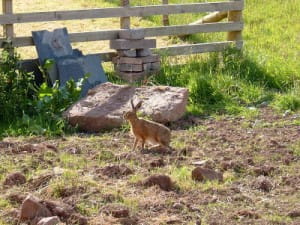 No news is good news..and also reflects the lack of an internet connection.

We are in! Hurrah. The recent glorious weather has provided the best of starts with the sunshine emphasising how fabulously light this house is right through to late evening. Its not properly dark for many hours in this part of the world as we approach midsummer so the changing light outside is a constant delight.

Lots of building info to convey but the detail will have to wait a few more days, as will photos. Time and attention is devoted to our business and family needs at present. Unpacking is a slow process but we have everything we need. Having lived in a caravan for 9 months it is clear that our lives don't need most of the 'stuff' we have packed away in boxes so there's no urgency in that area. We've been concentrating on making sleeping and eating areas comfortable.

Quick info for today's blog;
1. We are SO pleased with our house. Satisfaction and feel good factor is high.
2. The quality of the architecture and the build is superb.
3. 3 points to resolve for building control i) one step on the patio is of a different height to others, ii) lashing eyes are to be provided for a window cleaner to clean the large first floor bedroom window and iii) on the same window there is ongoing discussion whether an internal barrier/rail needs to be put in front of the window - its a fixed light but the building control officer is considering this point, more later on that
4. Externally we live on a rather rough looking plot - plenty of work in the years ahead.
5. The apple trees are in blossom and look stunning.
6. The poorly hen has recovered completely and the hens are completely free range now that the chances of being run over have diminished. About 5 eggs per day are being produced.
7. The temperature in the house is pretty even despite it being hot outside and the MVHR is at its lowest setting.
8. The slate floor is particularly terrific in terms of appearance.
9. There is some snagging but not much except relating to the windows which have a good number of small issues to resolve. The supplier is currently proving slow to deal with them despite our first contact being around 2 months ago now.
10. Phone line being connected on Friday allegedly.

I've spent part of this evening contributing to a National Park meeting on renewable energy and sustainable building design and feel quite fired up on the whole subject. I came home, had a great discussion with Steve (before he went to Ikea for late night house shopping), then watched Grand Designs revisited about an underground house which essentially didn't need heating even in winter.

The whole debate about 'eco' and 'sustainable' is massively involved. We have built a well insulated, airtight, timber frame house with a thermal mass of 40 tonnes of concrete in the foundation slab to keep the internal temperature stable - that's great from an energy efficiency perspective, but is that scale of concrete usage a good thing, not least as the production of cement is an energy intensive process? Someone somewhere could maybe establish the whole life cycle energy equation.

Energy efficiency is a very important part of sustainability but I'm not sure if I can get my head around all of the issues. We've got fantastic argon filled double glazed windows with 'u' values of 1.4 (standard windows being between 1.8 and 2.0) and they are from Norway 'cos the Scandinavians having been building sustainable houses for years but ideally we should be buying UK produced windows in order to minimise transportation and support home industries...but it couldn't be done remotely near the cost as they would be regarded as 'one-offs' and 'specials'.

Anyway that's nearly enough...I looked at another blog this eve which prompted me to tell you about Earth Hour whereby you switch off your electricity at 8pm this Saturday for one hour. Its one of those experiments in activism which last year saw the city of Sydney reduce its 'leckie load by 10% thus illustrating the impact of individual actions. See the vid at http://www.youtube.com/watch?v=UcHz6Jv4l-g