A flurry of snow, beautifully clear skies, sunshine and a hurricane all in 24 hours. Work on site with the two holiday cottages has progressed well and we're pleased to dust off the blog to show you some updated photos.
The view here of the cottages from the east shows the two bedroomed stone building on the left of the photo and the four bedroomed one on the right. The larger cottage is finished partly in white render and will also have larch clad areas on the unfinished section you can see. The brown material visible is Pavatherm which is a compressed wood fibre board used as an external insulation material. That area will be larch clad which will age fairly quickly to a mellow silvery grey. The materials used fit very well with the local vernacular and have also been used on our own house. The red sandstone is well over 150 years old and is typically 2feet thick. 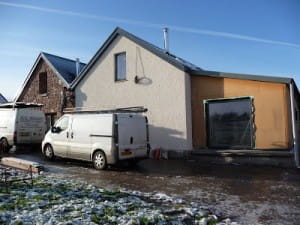 The official naming of the two bedroomed cottage... 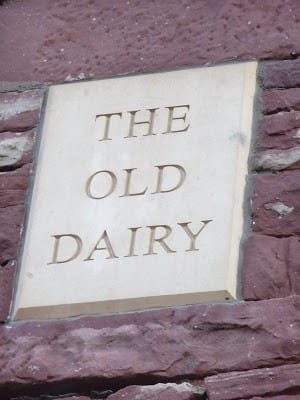 We commissioned a name stone which is placed high on the west gable of the cottage. I'm really pleased with the way the whole building looks now, the cleaned up stone is looking all the more splendid in the winter sunshine. For a quick reminder of how it looked check here.
Both cottages have access ramps and at grade entrances for wheelchair users. They also have plenty of big windows to maximise those views of our beautiful surroundings, being strong on energy conservation the windows are Argon filled double glazed with sustainable timber frames. 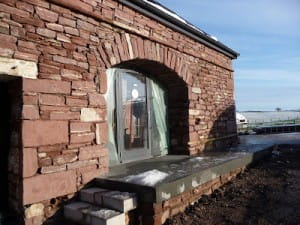 The interior of The Old Dairy. The living space is a full height room with high level windows as well as ground floor sliding doors to the patio. You can just see the pipe which will serve the wood burning stove on the left. 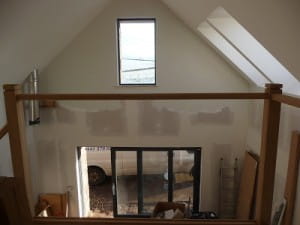 The living space of the larger cottage is impressively large and, again, has big windows for big views. 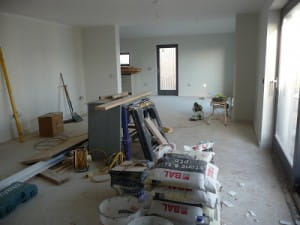 The view below is of the Campsies (to the south-east) from one of the bedrooms. 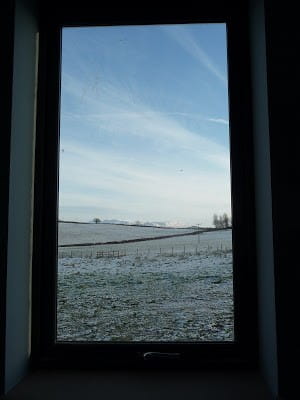 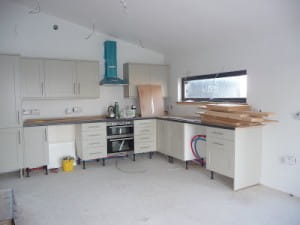 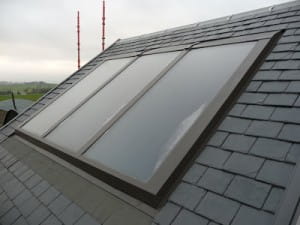 and photovoltaic nicely generating electricity to serve both cottages. 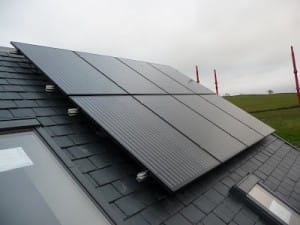 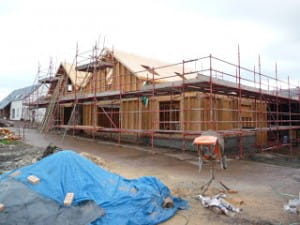 ... has been fairly rapid during the long days of a Scottish summer. Since pouring the floor slabs the timber frame has gone up in a matter of weeks, with work now starting on building up the old dairy's stone walls another 400mm to roof eaves level so our guests will have plenty of headroom upstairs! 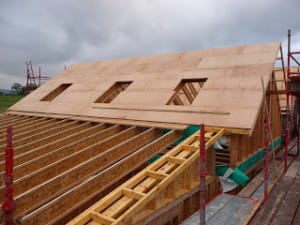 Construction design is similar to the house, using an insulated timber frame clad with woodfibre board on the outside for extra insulation and to reduce thermal bridging. This keeps the wind out and, with the help of fancy tapes and membranes on the inside, the heat in. Heating is to be from a ground source heat pump and solar thermal panels, with solar PV offsetting electricity use. Inside we just have underfloor heating on the ground floor which will keep things cosy during the chilly winter months! 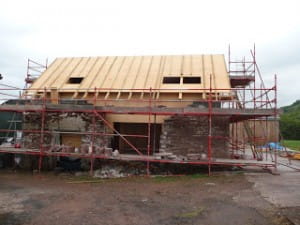 Over the next couple of months we should see the roof windows in and the roofs slated, then hopefully, the windows and doors will have have arrive so the cottages can be wind and watertight before the cooler and wetter months...roll on Autumn!

So here we are starting a new and exciting adventure at East Cambusmoon. Three years ago we moved into our house, beautifully designed and immensely energy efficient, see here. We adopted a very low energy approach to the design and the construction detailing which focussed on significant levels of insulation, a high standard of air-tightness, strong passive solar design and a ground source heat pump for the heating and hot water, supported by a small PV array and mechanical heat recovery and ventilation. When we were at the design stage 4 years ago this approach was not widely taken but, even in the short time since we moved in, more people and architects are looking more broadly at how homes and buildings are managed environmentally. We joined the AECB and adopted their Silver Standard for energy use and carbon emissions. In truth the house has far out-performed this standard and even in the last particularly cold winter was warm all day every day at very low cost. 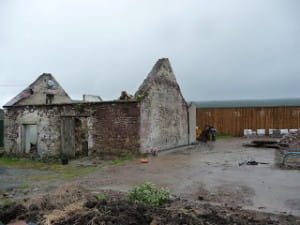 The main difference between the projects are that the house was a new build and the holiday cottages are a conversion of two very tired farm buildings. Notwithstanding our intentions to replicate some of the approaches we took with a brand new building we are very aware that we are renovating an old dairy and byre and will certainly be retaining the architectural features the buildings; the red sandstone which was quarried locally, the arch over the doorway and the window recess with wooden lintel. 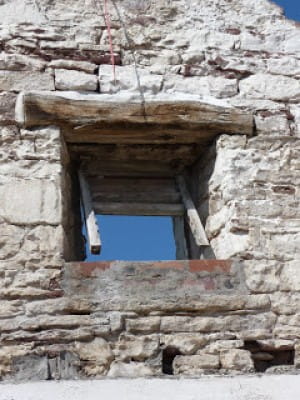 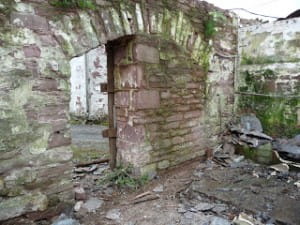 Here we are creating two adjoining holiday cottages, one of two bedrooms, one of four. As we are in Loch Lomond & Trossachs National Park we hope that some of the year-round visitors to this stunningly scenic area might like to come and stay in the cosy warm luxury of our holiday cottages. As you can see we're just starting the conversion works and we'll do our best to record the journey on this blog.

The building story so far has been one of rapid change. The roofs have fallen in and the rubble cleared out; in the stone building (which will have two bedrooms) the 'hole' for the sliding patio doors has been punched through and the stone stockpiled for reuse; in the larger unit, which was brick built in the 1950s, the walls collapsed so extra blockwork and labour will be required; floor levels were equalised as existing floors sloped. Then we get into the first stage of serious insulation - the floor. So much heat is lost through the floor, don't waste it!

In the past week 200mm of polystyrene and polyeurathane insulation boards have been laid throughout the buildings and on top of this will float 30 tonnes of steel and concrete in the 4 bedroom unit and 15 tonnes of the same in the two bedroom unit. Before the concrete is poured the underfloor heating pipes are installed; this is done by fixing the pipework (large diameter polythene pipe ideal for use with heat pumps) to the steel reinforcement mesh with tie-wraps. This approach works well with ground source heat pumps which have lower operating temperatures than the more frequently used shallow tray form of underfloor heating. The concrete provides the thermal mass necessary to stabilise the temperature and keep those cottages lovely and warm when needed. 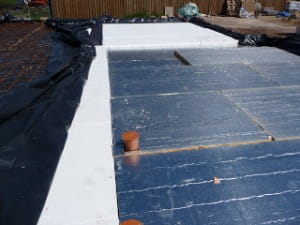 We're using Anderson Floorwarming for the underfloor heating, hot and cold water systems, installation of the ground source heat pump and solar. We are happily working with the same builder, subcontractors and architect as we did on the house so its nice to see familiar faces back on site. 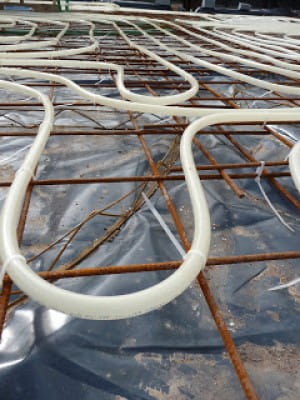 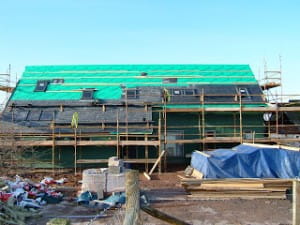 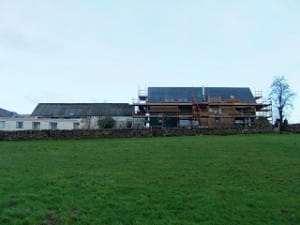 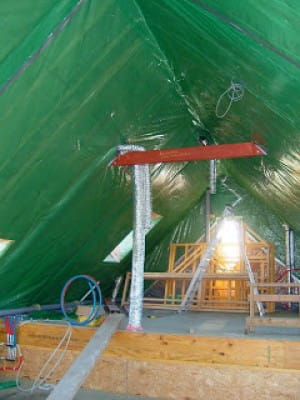 Afterwhat has seemed a long spell of dreich weather, the sun finally came out today and the slaters made significant progress on the roof, now about 75% slated. Inside the joiners completed the poythen vapour membrane work on the 1st floor such that we now have a near airtight house.

As I have mentioned before airtightness is an essential element in low energy housing; it allows the insulation to work properly, prevents draughts and ensures that ventilation can be properly controlled. The old adage 'insulate tight - ventilate right' has to be the watchword for the eco-selfbuilder, and if planned and implemented properly, will go a long way to achieving significant savings in energy even before considering renewable energy systems and high efficiency boilers.