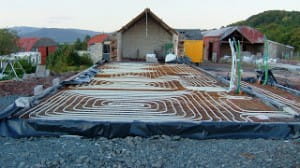 The lack of a posting for the last six days hasn't been because a lack of activity at ECF - far from it...! Building works on the house have continued on apace, whilst the hens and windfarm development have provided a welcome diversion from a busy site!

After the 200mm floor insulation was laid on Monday the damp proof membrane went down and the reinforcement mesh was cut and laid on top, supported on 40mm spacers to set them at the required depth within the slab. On Tuesday the heating contractors arrrived to tie the pipes to the mesh, but on investigating what seemed a minor query by the builder in respect of the structural drawings at the end of the day it was clear that we had a problem.

With about 70% of the heating pipes laid, it turned out that the reinforcement mesh to which they were tied had been laid incorrectly and needed to be rotated by 90 deg. in plan. The floor slab was designed to use a 'uni-directional' mesh which is stronger in tension in one direction than the other - and guess what....! To be fair to builder and architect, it simply wasn't obvious from the structural drawings and on Wednesday everyone simply got on with dealing with the problem and close of play saw the project at a similar stage as 24hrs earlier - albeit with the mesh now correctly orientated. It was a gloomy day however, as whilst there was little material wastage, all of the underfloorheating pipes had to be pulled off and re-tied along with all the mesh which had to be removed and re-cut.

By Friday everyone had moved on and at 0745 a large crew had gathered on site awaiting the first of three deliveries of concrete, which subsequelty arrived at 0800 - bang on schedule. With expansion strips fitted to the inside edge of the slab 'form' and a top layer of reinforcement placed over supporting wall points, the resident digger started to scoop the concrete onto the previous three weeks work. A 'bunyan striker' bar (a huge rotating roller) was used to level/vibrate/compact this sloppy mix into the mesh/pipes. By late morning th whole lot was poured and levelled and the crew got on with finishing off the rest of ground works. The afternoon was spent further levelling the concrete by hand and by 5pm the job was done.

In all 21 cu.m of concrete was used, 95% of which is supported on packing foam! This will add 'thermal mass' to the building and help to ensure a stable, comfortable internal temperature. 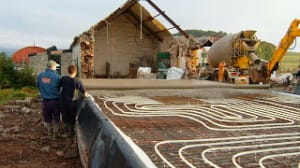