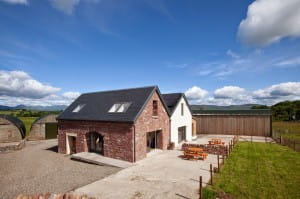 Ok, so when we set up this blog the intention was to do 'regular'ish' new posts on developments at East Cambusmoon....the last year blog wise was rather infrequent, and it is now just over a year since our last post! Well, there's been much happening here in the last 12 months, so much so that we've had little time to report it!

The holiday cottages have been getting busier not just because of the summer, but also due to the great feedback we've had from our guests to whom we are extremely grateful for taking the time to do so. We were also over the moon to be awarded 'Gold' accreditation by the Green Tourism Business Scheme last November and strive to improve our sustainability credentials without compromising on quality.

But blogs are very much about the 'now', so what's the latest?

This year we've been able to take a little more time to think about the management of our 5 acres of grassland, which we've allowed to grow bar a few weeks grazing in April/May. The point of this is to provide an improved habitat for wildlife, in particular voles which are a a principle food source for owls. The grass is now knee high in our top field bar a couple of mowed patches to facilitate the occasional game of dog-football (we now have a dog!) and allow our guests to stroll out into the wild without getting soaked! Later in the summer we'll make and put up a couple of owl boxes and see how we go. 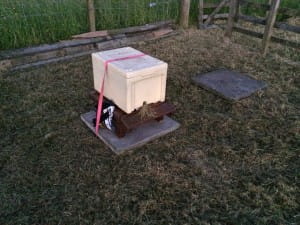 On a similar theme, I have been learning about beekeeping over the last two years and recently took delivery of our first colony of honey bees.

There's some history and rationale for taking up this pastime which I won't go into the detail of right now, suffice to say that a) I adore honey, and b) honeybees really do need our help these days! Beekeeping merits more than one blog post and like other forms of animal husbandry, is governed by the seasons.

For now though, our beekeeping adventure starts with a polystyrene box containing 6 'frames' of healthy brood, food stores, workers, a few drones and a young queen with an insatiable appetite to build her empire....!