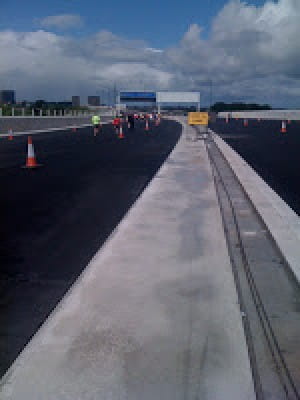 Today we joined the M74 Bike n hike ride along the new link road joining the M74 to the south side of the Kingston Bridge section of the M8. The contractors opened up a stretch of the new road to cyclists, runners, wheelchair users and families with kids on scooters, in buggies and in trailers to raise funds for a combination of 8 charities. Good PR on their part, nice bit of fundraising and good fun for us.

It was amusing to cycle under the blue road signs on the overhead gantry indicating Carlisle, the children wanted to know if we were cycling to the Lake District today? The route was only 14km long but we enjoyed the blast along the tarmac despite the wind making the return leg harder work for the children. 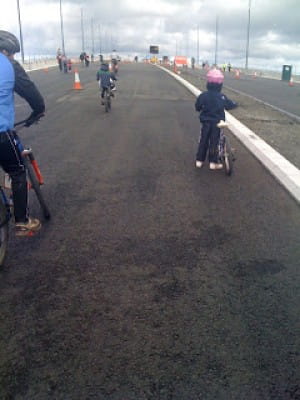 The new link road will open in late June, it will be interesting to see if it eases traffic congestion in central Glasgow and make the through route to Loch Lomond any quicker.

Day 2 (yesterday, Sunday) - an earlyish start of 8am for us, not because we're awfully diligent but Kath's husband's offer of a lift to where we ended day1 fitted with tee-off time at Strathendrick golf course. The forecast for the afternoon was heavy rain so it seemed like an ideal chance to get a few miles under our belts before the rain set in. Weak sunshine and very light showers barely penetrated the Garabhan Forest, the first section of today's walk, but it was lovely to be amongst the silence and calm of the trees and clearly hear bird song as we warmed up the muscles for the 15 mile section to Rowardennan. 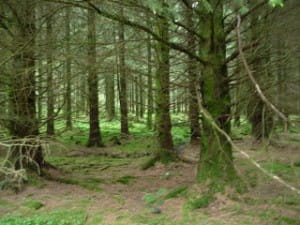 Forestry operations have been ongoing recently so the tracks were muddy but at least there were no machines working today so no diversions were necessary. 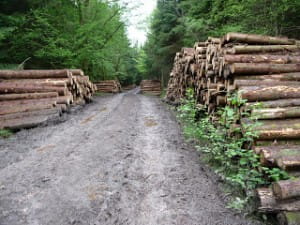 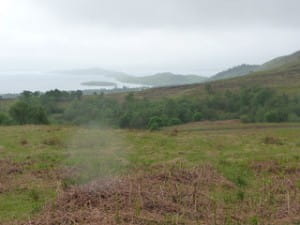 As we left the forested area it was most exciting and rewarding to see Loch Lomond and some of its islands. We had a decent view although the mizzley rain never quite went away. The streams we crossed were in fine flow and everything looked green and vibrant. 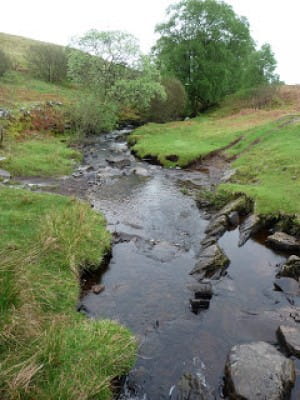 Our first proper view of Conic Hill and it seemed further than we had thought, perhaps because, for a period, you spend time walking away from it rather than towards it. However, we were soon at the foot of the eastern shoulder of the hill. Although I've been up Conic a few times it has always been directly from the car park at Balmaha so, like day1's walk, it was really good to see it from a different perspective. 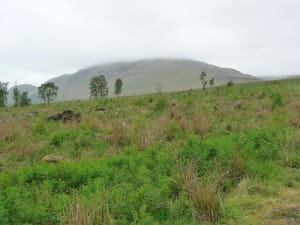 As we climbed the shoulder onto the ridge the rain came down, paths were running as small streams, and as we tipped onto the top we were met with a strong wind which drove the misty rain directly at us. No stopping, no views to admire, we just put our heads down and dropped down into Balmaha as soon as we could. On day1 of the West Highland Way we encountered over 100 people, on day2 it was significantly less. Partly this will be due to differing start times but also many we met had chosen a low level option to avoid Conic Hill. Those who we met up the hill seemed slightly manic and happy and we had some nice wee chats with fellow walkers. 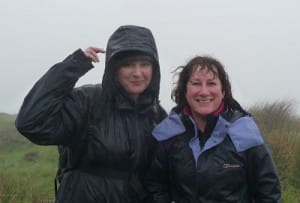 Dropping down into Balmaha you pass through some lovely native woods with plenty of bluebells, young ferns and gothic-like fallen trees. I really enjoy a stroll here and its immensely accessible from the Balmaha side without going to the top of the hill. 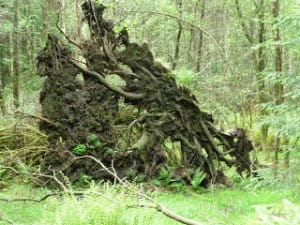 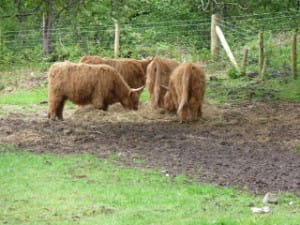 A reviving coffee stop at the Oak Tree pub and we were on our way north alongside the Loch. The path is mainly through the wooded edges of the loch, sometimes with short bursts up slopes to viewpoints and sometimes with boots crunching on the shoreline beaches.

The photo below is at Millarochy Bay.. 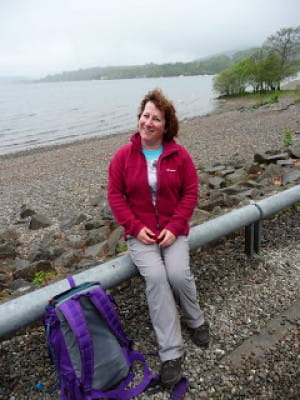 And this one is at Sallochy Bay, about an hour south of our journey's end, when the sun came through and finally beat the rainclouds away for the rest of the day. 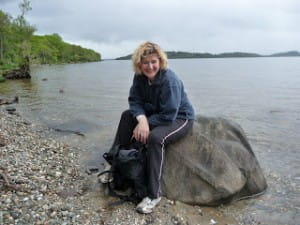 We both found the last part of the walk pretty tiring. Its like being a kid again, quite literally thinking 'are we nearly there yet?!' Day2's walk has a little sting in the tail, a couple of final short sharp inclines just to eke that last bit of effort from our warm heavy feet. 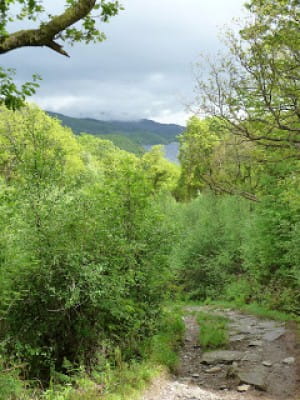 The view from Rowardennan looking north. Loch Lomond is a beautiful place indeed. 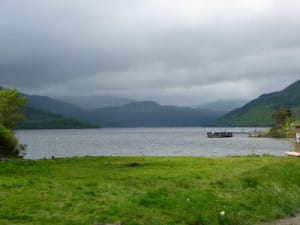 Most people we met were stopping in Rowardennan for the night, some were undertaking the next 7 mile section to Inversnaid without stopping, and we, like others, were heading home to make plans and dates for continuing the rest of the Way. 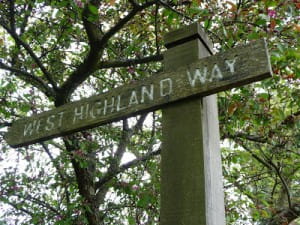 One winter's eve, in front of the stove, with a glass of wine to hand my friend Kath and I decided that 2011 would be the year for us to tackle a long distance footpath. Not just any route but our local West Highland Way, a 97mile wander from the outer 'burbs of Glasgow through lowland valley to the bonnie banks of Loch Lomond and then north through the beauty of Highland Scotland, across the wilds of Rannoch Moor to the edge of Glencoe and then finally via the Devils Staircase and on to Fort William and the bottom of Ben Nevis, our highest mountain. Today we took the step from fireside ramblings to real ones. 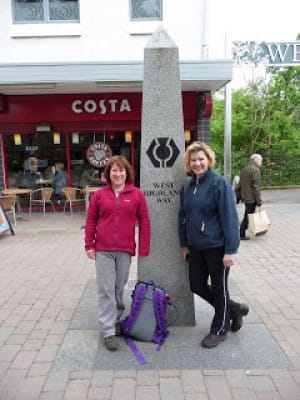 At the start in Milngavie. There were masses of people starting the walk today, Saturday being the most popular day to start. We are walking the route in weekend 'chunks' as neither of us can take a full week off work at the moment but some were starting out with full camping gear for a week of walking. Lots of people, lots of approaches.
Sometimes getting out of towns can be the trickiest part of a route but the waymarking and the path for the whole of today was very clear and to be honest the map was kept in my pack the whole day. 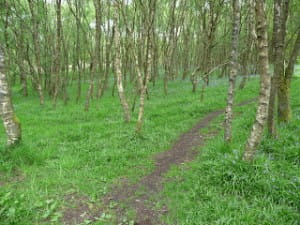 The early part of the route took us through pretty woodland, the sun dappling through the trees and falling on swathes of bluebells, campion and other wildflowers. 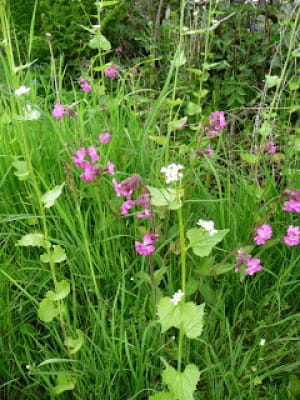 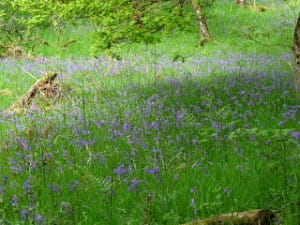 After the Carbeth road we entered a wider and more open valley with wide views, big sky and first views of Ben Lomond, the Cobbler and beyond. We only live a short distance from here but it was so interesting walking on a footpath in a different part of the valley to the road we may usually travel. Its also fun taking a slower pace and having the enjoyment of absorbing your surroundings.
The photo below is of Dumgoyne hill, at the bottom of this hill is Glengoyne Distillery which is, I believe, the most southerly of the highland malts. 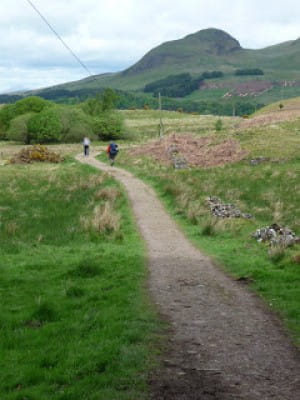 Throughout today the path provided easy walking, some of it on disused railway line routes. There are various places en route where you can stop for lunch or visit a cafe or pub and it would be very easy to leave a car at either end of the route to make it a linear day walk. 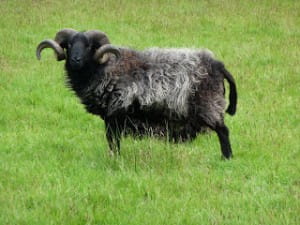 This marvellous looking sheep (anyone know what breed?) looked on as Kath adjusted her boots to prevent them rubbing her ankle. We're both treating this weekend as a warm-up for the route further north and what we relished most was the knowledge that because we live close by we would be heading to our own homes at the end of today.
As the walk goes through the hamlet of Gartness (good for watching the salmon leap at the right time of year) there is a very sweet sight offering tired walkers replenishment at an honesty shop outside someones house. 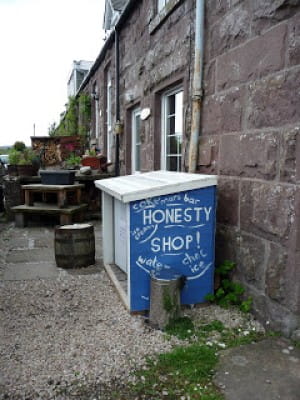 As you approach the final couple of miles of any walk I'm sure appreciation of the view is heightened by the wearniness of your muscles, this view below is looking back to Dumgoyne hill which at the start of the day lay ahead of us. We've had a fun day. Really enjoyed finishing the walk into Drymen and jumping into the pub for a large glass of wine each. We called a lift home for the 4 mile journey and a relaxing evening. 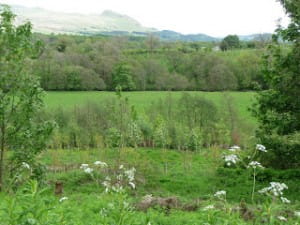 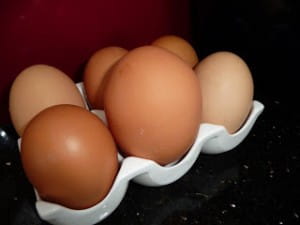 One of the great joys of hen keeping is having lots of lovely fresh eggs for breakfasts and baking. Last year we reared 10 chicks and since earlier this year the females have been laying. During the cold winter our hens conserved their energy but currently in the long daylight we're getting between 6 and 10 eggs per day. I've always been aware that the eggs produced here are large but hadn't ever investigated what the size categories actually mean. I was prompted to check after Molly came back from collecting the eggs with this super sized offering... 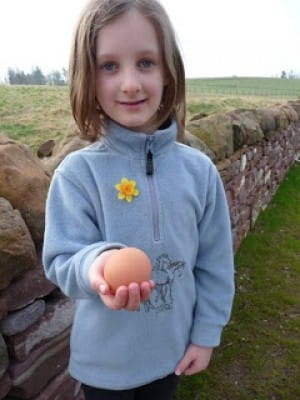 According to Omlet an extra large egg is over 73grams; so you can only feel sorry for one of our poor hens who laid this monster 120grams egg. Yes it had a double yolk and yes it made a very fine and tasty omelette for lunch with a few salad leaves on the side.

The title of this post? F U N E X - well if you're not familiar then may I take you back to the early part of January 1975, I believe, British comedy in the form of the Two Ronnies and their sketch which I remember being about M N X, that'll be ham and eggs.