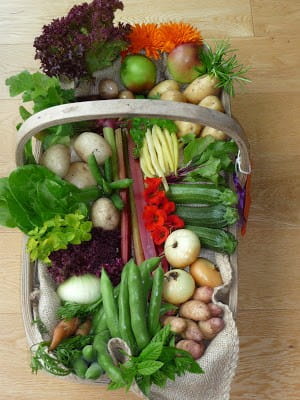 Friday evening and Saturday morning were a flurry of village show preparation activity. We're pretty last minute and certainly in the rush I suspected that I'd forgotton to put baking powder into the banana loaf , sure enough when the judges sliced the loaf in half it was obviously veeerrryyy dense. So no prizes there then! Although it has all been eaten, tasted great and was very popular at home. Thanks KC for your comment on the last post. I happily managed to get a third prize for the Victoria Sponge. Most of all I was excited to get the first prize for my 'basket of plenty' as shown above. 18 months ago we didn't even have anywhere to grow veg and, currently, we're close to self-sufficient in veggies.

I made you a cake in honour of the East Cambusmoon return to blogworld. Partly inspired by the new BBC2 series The Great British Bake-Off, which was easy watching TV last evening, and partly by some thoughts of entering the Gartocharn Flower Show this weekend, I used Mary Berry's Victoria Sponge recipe from the TV programme and it turned out a treat. Now if I get my act together and make another one for the show I realise that putting cream into the middle is not going to cut it with the judges on Saturday, apparently thats a big no-no, but today is the last day of our school holidays, we've had a bundle of people around and this sumptuous wonder is just about gone. The man of the house suggested more jam would be appropriate....but he caveated his comments in advance with plenty of praise. Hereabouts its traditional to use raspberry jam - is that the same everywhere? 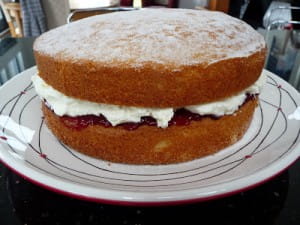 Here is another new project for us - 9 chicks, this photo was taken when they were about 3 weeks old. More of them another time. 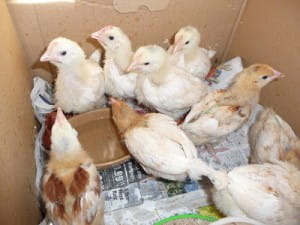 Thanks for those of you who keep checking back in with this blog. Your patience has been appreciated.