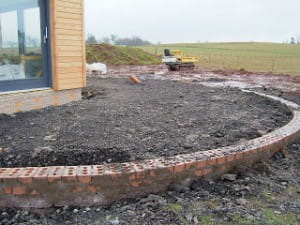 The patio area around the southwest corner of the house - sunspot for summer days and evenings. It will be topped with black limestone slabs which are due to arrive on Wednesday-ish. 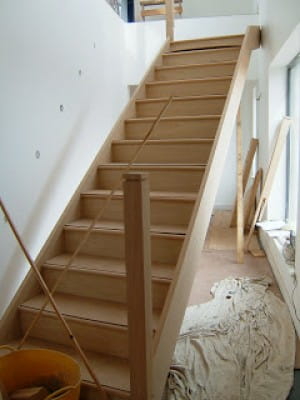 After much delay the American blond oak staircase has arrived but is needing some adaptations by our onsite joiner. The timber is beautiful though and despite the general mess in the house is one of the final landmarks in the building of the house. 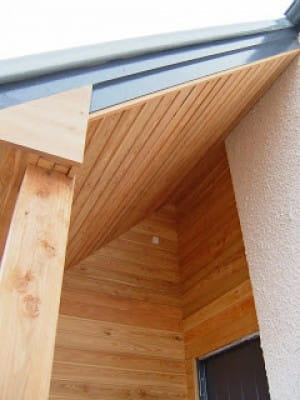 The above photo is of the porch area by the front door. We've continued the larch cladding in this area which looks good with the height created by the continuation of the roof line. Jim the electrician is fitting the lights we've bought in the next day or so and this includes one to uplight this area, low energy of course! 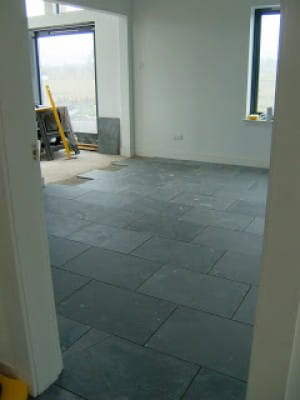 Herewith the slate flooring in the family room which attaches to the kitchen/dining. I felt most sorry for the tiler who is trying to lay 82sqm of slate tiles whilst all around are busy with their own trades, typically on Friday this numbered around 12-15 people. At one point he locked the front door so no-one else could come in. The above slating has not been sealed but the bathroom has and the finish looks super. The floor will need resealing every 3-5 years but as this can be done with a mop and bucket it doesn't seem too onerous.

I've spent part of this evening contributing to a National Park meeting on renewable energy and sustainable building design and feel quite fired up on the whole subject. I came home, had a great discussion with Steve (before he went to Ikea for late night house shopping), then watched Grand Designs revisited about an underground house which essentially didn't need heating even in winter.

The whole debate about 'eco' and 'sustainable' is massively involved. We have built a well insulated, airtight, timber frame house with a thermal mass of 40 tonnes of concrete in the foundation slab to keep the internal temperature stable - that's great from an energy efficiency perspective, but is that scale of concrete usage a good thing, not least as the production of cement is an energy intensive process? Someone somewhere could maybe establish the whole life cycle energy equation.

Energy efficiency is a very important part of sustainability but I'm not sure if I can get my head around all of the issues. We've got fantastic argon filled double glazed windows with 'u' values of 1.4 (standard windows being between 1.8 and 2.0) and they are from Norway 'cos the Scandinavians having been building sustainable houses for years but ideally we should be buying UK produced windows in order to minimise transportation and support home industries...but it couldn't be done remotely near the cost as they would be regarded as 'one-offs' and 'specials'.

Anyway that's nearly enough...I looked at another blog this eve which prompted me to tell you about Earth Hour whereby you switch off your electricity at 8pm this Saturday for one hour. Its one of those experiments in activism which last year saw the city of Sydney reduce its 'leckie load by 10% thus illustrating the impact of individual actions. See the vid at http://www.youtube.com/watch?v=UcHz6Jv4l-g 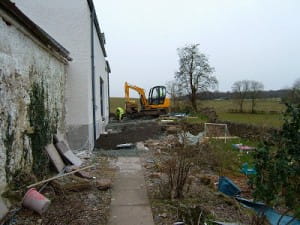 The construction of the 'commute' between the office and the house is underway (above) and the patios are being formed around the south gable (below). 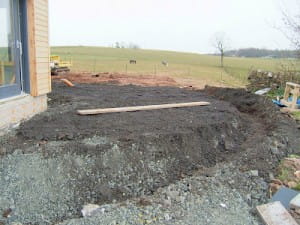 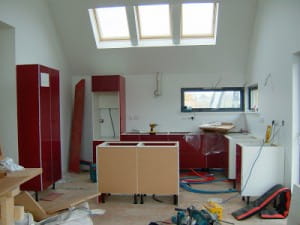 Internally the kitchen is on its way. The installers are great, very flexible in their approach which is good because there's a few bits and bobs of adjustment to sort out as well as an evening trip to Ikea tonight to change the handles! The measurements in the utility room don't stack up properly so there's amendments needed there too. 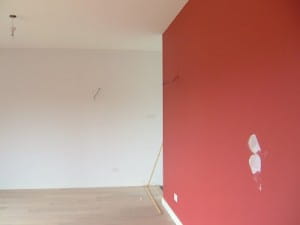 The staircase is 'in production'......not sure what stage that means or when it'll arrive.

This lunchtime I've been buying 110sqm of external slabs to be here by the end of the week; large wardrobe for the hallway to be here tomorrow (Steve has a slot between 8.30 and 10pm this eve to collect that!?); securing the contractor and price for grubbing up and tamping down the massive concrete base of the old dairy shed opposite the front door; finalising the details for the grant contribution to the cost of the heat pump.
Now back to earned employment for the rest of the day.