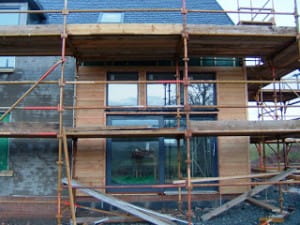 Once again, now the joiners have finished the roughings (plasterboard etc) inside the house and are ready to move on with the larch cladding outside, we’re getting battered by gales and rain. Nevertheless, despite getting a soaking in their first ten minutes outside yesterday Craig and David did one wall of the three to be larch clad and we’re delighted with the results. Ironic really, as the larch which the kit company sent was completely the wrong profile to what we specified, but we actually quite liked it and went with it!
The profile specified was ‘bevelsiding, which is wedge shaped in cross section and simply overlaps the board underneath. But we were sent a more robust tongue and groove profile which interlocks with adjacent boards, a detail which I feel adds a more robust line of defence against the weather.

Talking of which, my mind has been considerably exercised recently as to whether we really needed a layer of breather membrane on the outside of the woodfibre board cladding, something I really need to get off my chest on the blog and hopefully solicit comment. As a reminder to construction detail geeks who are still with me, from inside to out our wall build up is as follows:

The problem with the breather membrane is that it has a tendency to be blown off in high winds when exposed, as the staples don’t get a good fix into the Pavatherm boards. Once the bricks are up however, it is properly fixed back with large plastic washers which are clipped onto the wall ties, and of course it is fixed in place in the timber areas by vertical battens. Inspecting the cavities from unfinished window reveals shows this solution to be just fine (looks rather like a quilt!).

On the minus side there is the cost of material and about a day of labour to fix it on, plus a fair degree of effort in marking out where the studs are so the brickies know where to bang in the wall ties. On the plus side however it does add that extra line of defence against the outside world, and at the very least has provided a good degree of protection to the structure during construction prior to the rainscreen being built up.

Breather membrane is a ‘must do’ detail in standard timber frame construction which has the following build up:

The conundrum is that the suppliers of Pavatherm advise that the breather membrane is not required as the outer layer of this board is water resistant, but also say its not a problem if a membrane is used!? So has it been worth the effort to add this extra layer? On balance yes, but only on the basis that we are building on a very exposed site.

I must admit to being a little tardy with my blogs of late, not least down to the fact that our cosy holiday let has no broadband so onlin leasure time is restricted. But, after a solid week in the office I'm ready to knock off early for the wekend so here's a pictorial tour...!

Entrance hall on entering front door and looking up; stairs to be against wall on left (to replace ladder!!!). Next photo shows view into utility room from kitchen - heat pump on right hand side with electrics/TV/SAT/DAB/Cat5e wiring all terminating on board on end wall (must work out what magic boxes to buy to distribute signals!) 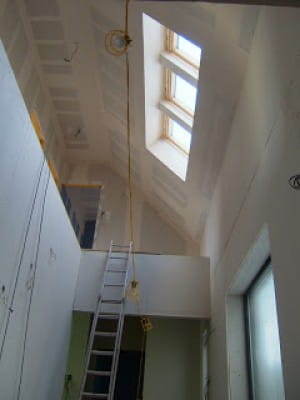 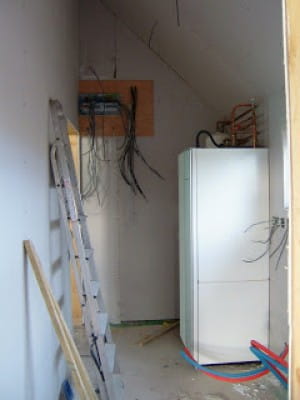 Room with a view - our bedroom to be precise, and this is the ever changing picture that we will wake up to... Next photo is the hallway looking down. 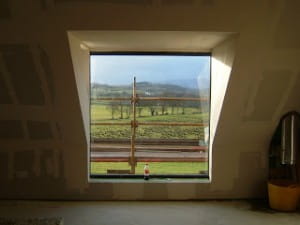 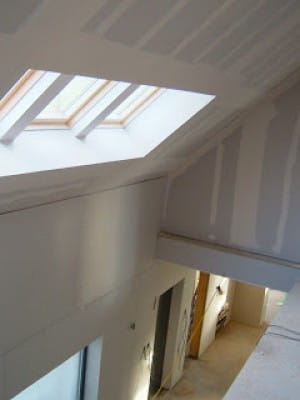 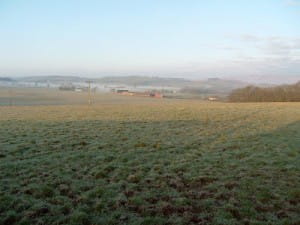 8.30am long view towards the farm from behind our local hill, The Dumpling

We've now sourced, and agreed on, tiles for all three bathrooms. My able assistant is showing the accent tile for the ensuite shower. For those of you who know the Hillington industrial estate in Glasgow you will appreciate the number of tile showrooms there are available and the angst of then getting the man of the house to approve selections. 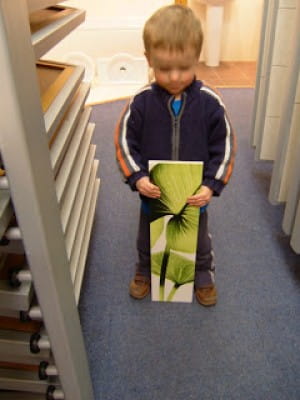 I bought the tiles for the ensuite and family bathroom this morning and just need to go back with accurate measurements for the downstairs bathroom as the dimensions of that have altered recently. The tiler is booked for next week so we'll see big changes inside. The white goods for the bathrooms are all in place now. I also swapped the shower tray for the downstairs room because of last minute adjustments there ensuring the door width complys with disabled access regs. The change made the shower tray larger than plan.

Back to the office for 11am so did the day job too. 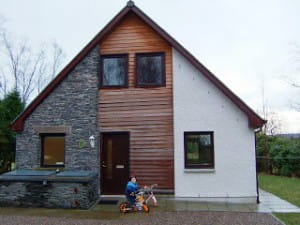 We've found the camera so here's a few pics from the holiday lodge we're renting. For the past 10 days we've had cold, dry and mainly sunny conditions which has been marvellous. It has been very cold

at night so we're glad to be out of the caravan for the time being. The lodge has 3 bedrooms so we've got plenty of space to play with and its generally very pleasant to be in a real house again. The lodge is set in woodland at the end of a long track and there is plenty of wildlife around, particularly deer and pheasant but we also have owls and woodpeckers both of which make plenty of noise at different times of day. 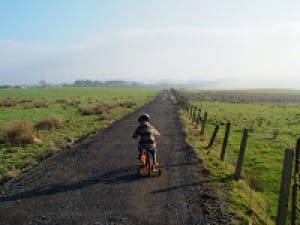