Not quite wind and watertight after Christmas...!

On our return from Christmas with family down south it was clear that the house had taken some battering during the short festive break. The area and our exposed site had been hit by severe gales on Boxing Day, resulting in significant areas of roof and wall breather membrane being literally torn off.
This was probably no big surprise with regard to the wall, as the breather membrane is simply stapled to the Pavatherm boards which don't have much hold being a lightly compressed wood fibe board.
The roof membrane was a different matter however, this being fixed down temporarily with 3"x 2" battens nailed every couple of feet. Despite being mechanically trapped by the batten and spiked with nails, this was simply not enough to avoid being torn from beneath the battens to expose the sarking board again, by now drying out and shrinking to reveal the (intended) ventilation gaps between the butt joints. As a result, the inside of the house is soaked again!
I left a message with our joiner to let him know, who dutifully showed up a couple of hours later in the middle of his holidays to fix the damage in the dark just in time before the next downpour!

Wind and watertight for Christmas! 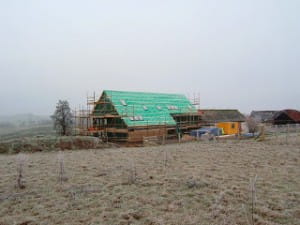 Yesterday we reached a major milestone with the delivery of the patio doors and main entrance door - the building was made wind and watertight and we now need a key to get in! This means that first-fixes and roughings can continue whatever the weather and the building is drying out nicely inside.

I've been working away from 'home' the last few days which has been frustrating, not least as there are many questions on detail items to deal with. I caught up after a half hour tour round this morning and it's clear that things are really moving on. 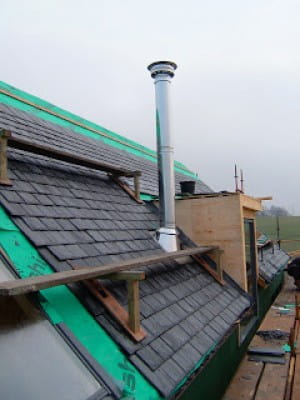 First fix electrics and plumbing are nearly all complete, with a few adjustments to make to the underfloor heating in the first floor bathroom and en-suite. Electrics are also nearly there with a few outstanding decisions to make on light switch locations and cooker load (ie. what cooker are we going to install!). The other first fixes remaining are the Heat Recovery Ventilation system ducting, TV/Satellite, phone, DAB (weak signal area for digital radio so need an aerial) and Cat 5 cabling.

Last but not least the slaters are making good progress and the stainless steel chimney for the wood stove looks superb, especially as the installation has been reinforced from the inside thus avoiding the need for external stays which might have spoilt the roofline.

It is very cold indeed. Last night -5 and today it hasn't hit zero yet, presumably it won't now as the light starts to diminish. Sunset is 1545 today. Sleeping in the caravan was just fine but getting out of bed is much more tricky until the heating has kicked in. The children don't seem to notice but have resorted to putting their slippers on now. As caravans are generally very poorly insulated the temperature difference between inside and outside is very small - yesterday when we returned home it was +3 degrees inside when it was +1 deg outside. Thank goodness it's not our permanent home.

The slating has started and is looking good already. The slates are being double nailed as we're in a very exposed and windy spot. This will help the slates stay in place although does make replacement more tricky should that be necessary in the future. The first fit plumbing is in place and the first fit electrics are in progress. The underfloor heating to the bathrooms is in place but needs adjusting in the ensuite as the installation team haven't taken account of changes since the early plans. There's plenty of activity on site as the final load of pavatherm which arrived on Saturday is being fixed onto the north gable. There is also an artic full of insulation parked on the road incapable of turning...apparently waiting for a smaller lorry to take off the load and deliver onto site.

Its just turned 9am on Saturday and we've taken a further delivery of Pavatherm Plus insulating board so the joiners can finish off the external insulation layer. There was relatively little activity on site yesterday as we were waiting for this delivery and the sliding door sets (3 off). The latter is now likely to be next week, but apparently has arrived from Penrith. I think these are around 6 weeks overdue and it's dissappointing that the windows from Norway arrived some four weeks ago and are now installed having been ordered at the same time as the patio doors! The main front door is also late and is sourced from Sweden.
The other happening this morning relates to the lame hen. Although it had a couple of better days in the past week it has now gone lame in both legs and is incapable of independent movement. So we had to wring its neck. I thought I could do this yesterday when it probably needed to be done but hen started clucking at me and I just couldn't so now that Steve has returned from working away he did the deed this morning. No, we're not eating it. There's no meat to speak of anyway but as we're not sure what's wrong with it it seems the best move....anyone with greater knowledge please advise!
We've got a fox prowling around. I need to repair/replace a bit of wire at the bottom of the gate to the hen pen before we go out this morning. There are fox prints on the top of the nesting box and on the roof of the hen house so we need to be sure to lock up quickly at dusk.I wonder if that explains the dead hares and rabbit the other week although I thought there would be more damage to the prey?
Rural living!......... we're off to Edinburgh today to see Santa, reindeer, lights, ice sculptures etc.

Lots of trades on site. 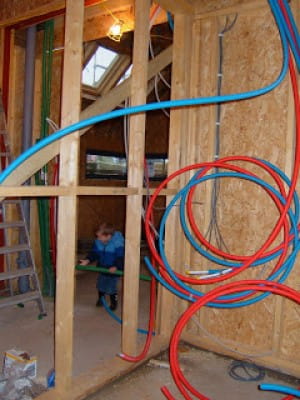 The underfloor heating folk have been here today. We are not having any heating upstairs except for underfloor heating in the 2 bathrooms. This will be served by the ground source heat pump as per the ground floor, albeit in trays rather than embedded in the concrete as they are on the ground floor. As the first floor is laid the guys have to work from the underside of that floor, I can't imagine that's easy but they seem to be managing just fine. 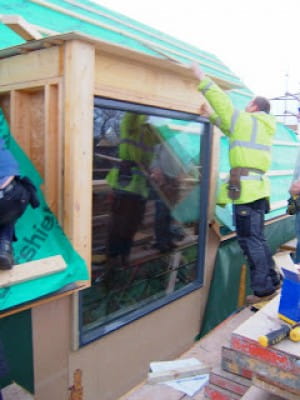 The 6 joiners who are here are covering various tasks - the exciting one for us is seeing the main first floor picture window being framed out. A number of adjustments have been made to this but it is now looking good. Inside the first stages of first floor interior walls are being established; the children have already decided which 'bedroom' is theirs by virtue of which windows they have adopted. There are lots of issues we are trying to resolve - the wrong cladding being one. More on that later... Weather report - its positively balmy here today. I think we are becoming so hardy and acclimitised that we don't realise its December.