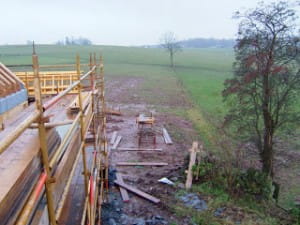 Amongst the generous mix of mud, scaffolding and construction materials we're relieved to have the 300m of 40mm diameter heat pump 'collector' pipe safely buried 1.4m underground. This photo from the upper scaffolding shows the end result in the middle distance which should re-vegitate over next spring.

We are very fortunate in having an ideal location for this collector system, being on gently sloping ground with a high water table. This will ensure that that low grade 'heat' taken out of the ground will be quickly replenished by this water movement under the ground at pipe level, with heat transfer aided by the sand used to protect the pipe aganst sharp rocks when backfilled. 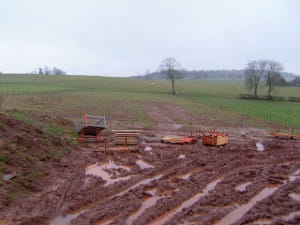 Since last week when I mentioned that it hadn't rained much it has of course chucked it down most days this week! Ironically we had no water for most of yesterday as there was a burst water main somewhere on the west side of Loch Lomond which is a good distance from here.
Even the joiners finished early yesterday as they were soaked to the skin but this was also around the time that Steve and I realised/believed that some of the roof windows were not in the positions we had expected/designed. We arranged for the architect to visit site this morning.... 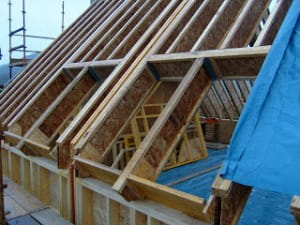 The main problem was with the vertical position of the two main bedroom windows and the ensuite window, in that when standing up and viewed out from the inside, they are below level of vision! This is made even worse by the fact that the soffits from the top of the window frame are set square to the window (as shown in the photo above), which appeared to be an error that had crept into the final tender drawings. We were keen to resolve this asap as the sarking board is to be fitted next week with slaters booked the week after, and thus the opportunity will soon be lost (forever) to make adjustments.

Discussion on site with joiner and architect largely sorted the problem with an agreed plan to set the three offending windows higher in the roof, and an amended detail on the upper soffits to bring them closer to the horizontal as intended. As an aside, our joiner rightly cautioned this latter detail to ensure that sufficient insulation space is allowed for between soffit and sarking to avoid cold bridging and even condensation. 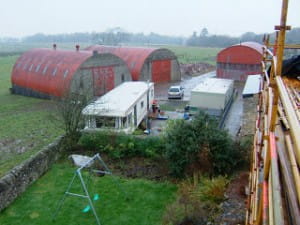 The view right is from the top of the scaffolding looking back to our 'trailer park' and some of the farm buildings. The office roof is just visibile to the right of the caravans.

Rather wierdly in the last week we've found 2 dead hares and a dead rabbit in different places around the steading area but none of them appear to have any injuries..... 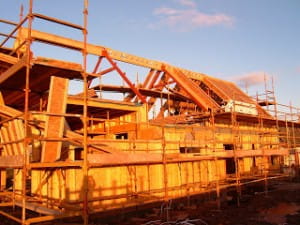 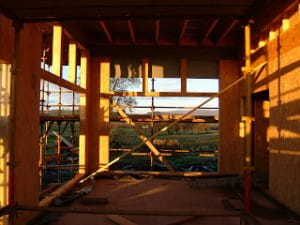 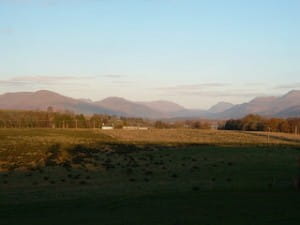 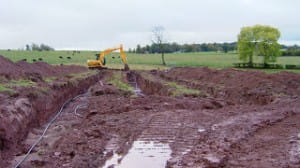 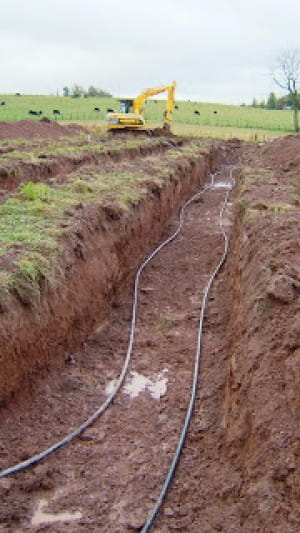 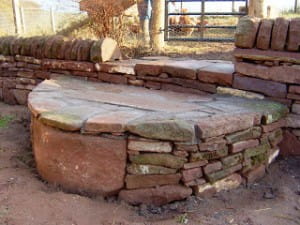 A continuation of the previous blog - the technology sometimes prevents such things. The step shown left was finished on Friday. The stone for the whole wall and the step has been recovered from the demolished farmhouse save for the coping stones which have been bought from a nearby farm where the wall had fallen down. The weather forecast for later in the week is distinctly cooler with daytime temps nearer zero and we have had our first conversations around the subject of 'how long can we/will we stay in the caravan'. No decisions to move out yet as most of the time its really not difficult. Naturally we would prefer more space and a lovely big bathroom but that is, quite literally, a work in progress. The office is in an old toolhouse adjacent to the barn which adjoins the house and with its high level of insulation it is a very pleasant place. Steve has been insulating the water pipes within the caravan and we need to tackle the ones outside where they are not underground.