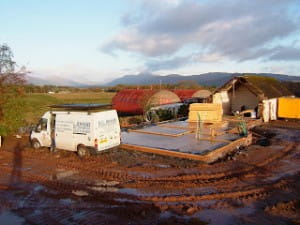 One of the landmark days on site - the joiners arrived at 7.50am, the first lorry and trailer load of timber frame a few minutes later. The first photo was taken around 9am as the timber was being moved to the house; the joiners spent much of the morning undertaking check measurements etc (apparently it was all within 5mm so that was good!) and moving the timber to the right place.

We had some wild Autumn weather at the weekend so it was a chilly post-frontal breeze as well as getting muddier around the site.

Around lunchtime the first wall was put in place on the wall plate - this being the northwest corner of the house where the guest bedroom is situated. As I was chatting on the phone the rest of that end of the house was put it in place - the wonder and speed of timber frame construction. This second photo was taken around 3.30pm and the house is really taking shape. This view is from the northeast looking at the kitchen on the left, the front door location in the centre of this elevation and then the ground floor bathroom at the right. 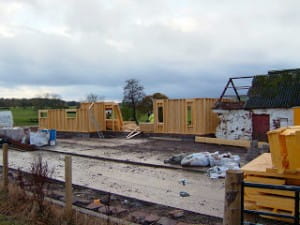 Final photo is the view from the window of the guest bedroom. You can see the rain coming over the hills! 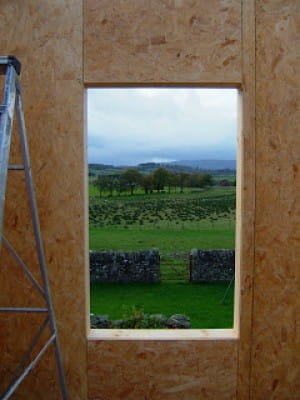 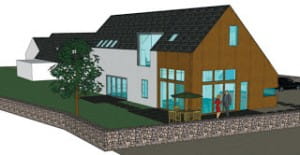 Probably since the oil crisis of the early 70's there has never been such a high level of public awareness and engagement in all things 'environmental', not least in greening up homes. In particular the UK Government has made a commitment for all new homes to be 'zero carbon' by 2016, an ambitous target which would make UK building regs on energy efficiency some of the toughest in the world, even exceeding the current high standards which exist in Canada, Scandinavia and Germany.

The problem is that new homes accont for just 1% of the housing stock annually at the current UK build rate, so what can the majority of the population do to reduce consumption and 'do their bit'? There is a huge amount of information out there and a good starting point is The Energy Savings Trust www.est.org.uk, but it can be a minefield as to what actions/technologies will truly bring genuine savings in energy, carbon and money. Here's a few ideas:

1. Insulation and draft-proofing/airtightness - do this before anything else, especially on the detailed design of a new build or extension. Usually, money spent on this has a much quicker payback than any of the technologies described below. For example, £2k spent on a mini wind turbine buys a huge amount of insulation and will payback much quicker.

2. Rainwater harvesting (for toilet flushing, laundry etc) - unless gravity fed or pump free, this probably isn't worth the cost or effort and will increase your energy consumption. Whilst saving mains supplied potable water which has used energy in its processing and delivery, it is unlikely that the energy used to do that by your water supplier will be less per cubic metre than by using a water harvesting system. Furthermore, if you are on a water meter the energy costs in operating such a system may not even be offset by the saving in water costs.

3. Mini wind turbines (fixed to house) - in most cases probably not worth the bother, but in some cases (rural, wind-swept property with no nearby obstructions) might produce useful power.

6. Solar panels (PV, electricity generating) - expensive and long payback, but very reliable (we have them) and beautifully simple. Most cost effective on building integrated applications. A better choice than roof mounted wind turbines for electricity generation in most cases.

7. Heat pumps - good choice for well insulated rural new builds with underfloor heating not connected to mains gas. Be careful over promises of '75% savings' - they still need electricity to drive the pump!

8. Wood burning stoves - go for it! In the vast field of alternative energy, the joy of watching carbon-neutral fuel being consumed by fire within the highly efficient combustion chamber of a modern wood burner is rivaled only by the gentle rotation of 150ft wind turbine blades! If you use an open fire, three quarters of the energy in the fuel you feed it goes up the chimney; in a woodburner, three quarters stays in the room, not to mention considerably reduced emissions. 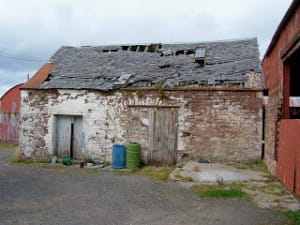 This week we've instructed the architect to commence work on plans for the former dairy. We're looking into the possibility of converting the building into holiday accommodation and prepared a brief to that end. We are very fortunate to live in a beautiful part of the world and the National Park designation has further enhanced this area's popularity for visitors. As you can see the slate roof is hanging together but there are some nice features to the building and we would like to bring it back into good use. The building is to the north of where our house will sit. The brief still adheres to our low energy principles but with an exisiting shell the approach will be different. At this stage we are looking at what sort of space we can create within the structure as it stands 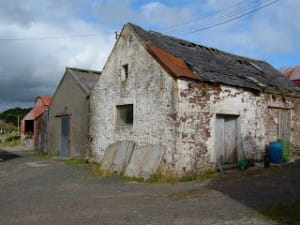 and exploring the planning situation.

Today the forklift was dropped off in order to be ready for Monday when the timber frame is due for delivery. Three year old son just said 'wow' and is very excited that more machinery is on site. Unfortunately a couple of phone calls and a visit from the builder brings news that certain elements of the kit are not ready - namely the steel portal frame and the first floor TGI joists. This means that work can start on erecting the timber frame next week but the extent will be limited because the steel portal is to be integrated within some of the prefabricated wall panels on site. This is disappointing for us but is outwith our control or influence so not worth stewing about. For the builder it is perhaps more frustrating, particularly as there has already been a break of three weeks of fairly good weather since significant work on site and as he has lined up scaffolding and crew to go full steam ahead on the frame. 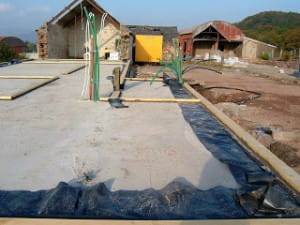 On Tuesday of this week the builders spent the morning fitting the wall plates (also called 'sole plates'). In timber frame construction these set out the plan of the ground floor layout and form the interface between the walls (both external and internal) and the ground floor slab/foundations.
The wall plates comprise timber of the same width dimension of the wall panels they support (ie. 140mm and 89mm), and are simply cut to length and laid on a bed of mortar (and damp proof course at the outside walls).
Whilst an apparently straightforward process, locating the wall plates in the correct positions is critical to the ultimate accuracy of the frame installation.
As an aside, this process also introduced a simple but effective airtightness detail to the building, in that the overhanging damp proof membrane (from under the slab) is folded back over the slab at the edges for later trimming and connection to the vapour membrane to be installed on the inside of the wall panels. Whilst not an essential detail (and usually omitted), this ensures an airtight and flexible linear floor/wall joint that should last through the first few years of the building 'settling' and drying out, a process often responsible for significant degradation of airtighness as cracks open between differing materials (eg wood/mortar) and thus worsening energy efficiency. Polythene membrane, being a flexible material, withstands this movement.
As an aside, airtightness is a key component to low energy building design alongside insulation, the minimisation of thermal bridges, orientation and glazing. Coupled with this it is essential to have an effective ventilation system to ensure good air quality inside - more on this and other airtighness details as the house takes shape.